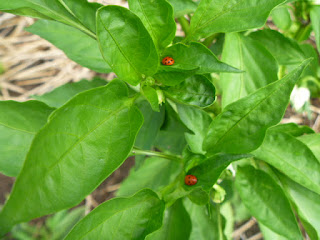 OMG  I thought I was eating cooked ladybugs! That would be the worst thing, and not because of the taste. They are my sweet little garden helpers. Jeez, I was wolfing down some steamed swiss chard and purselane, with tuna and diet dressing on top, feeling so dietishly virtuous, and glanced down, noticing some little red flecks. OMG I almost spit! Abby was right there, waiting for a crumb to drop. Ah it was pimientos from the sweet pickles, NOT ladybugs. I am not really a Jainist, and would eat a crunchy bug, especially after dieting for several days, but not my sweety pies.

I am meeting a bunch of gals I worked with 32 years ago. I have only stayed in touch with one, by best friend Joan, and probably don't even remember let alone recognize the others. So why do I even care if I am a little bit softer and fuller than I used to be? I have a phobia of appearing fat. It is true. I have the cognitive distortion, the secretive eating thing, the trick with the scale thing... it is a sad story. Almost as scary as eating a ladybug.
Posted by Jane Holbrook at 12:59 PM 1 comment:

Jane Holbrook
I thought up the name, "Current Girlfriend," for my boyfriend's jetboat. He is a guide on the Salmon River, which is full of big rapids and wild steelhead and salmon. Since boats are named after favorite women, and I am the current girlfriend (though he has had many) I thought this was a good pun.